Besides the above mentioned results he has a number of achivements on both working test, cold game tests and field trial 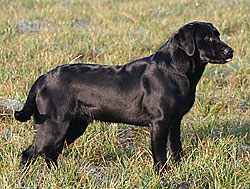 Chive has travelled in many European countries. Han went to Ireland for a Working Test and to Hungary for the IWT in 2011, where he helped to secure Denmark 2 a place as number 3 out of 33 participating teams. Chive was also on the Danish team at Skinners Cup in England May 2011 and on Coupe d’Europe in October 2011. In 2012 he represented Denmark at 3 internationale WT’s: Skinners Cup, where we became number 5 and at Chatsworth where we became number 4 – at that time the best international result. In 2012 he was one of the three team members of DK1, who became number 5 out of 30 European teams.

Temperamental wise he has all the traits wanted of a true labrador. His trainalbility and desire to work, makes him a wonderful dog to work with. He is kind and friendly with people and other animals and is often used as “uncle Chive” when new pups are being introduced. His patience with puppies is endless.

Chive obtained his titles in 2011.

Han is a most valued picking up dog during the shooting season.
Han has been used for multiple litters by various breeders in Denmark and abroad – including ourselves. His offspring seems to meet our expectations regarding health, temperament and working ability. Chive is homozygot black.